An era of Human’s Artificial Intelligence 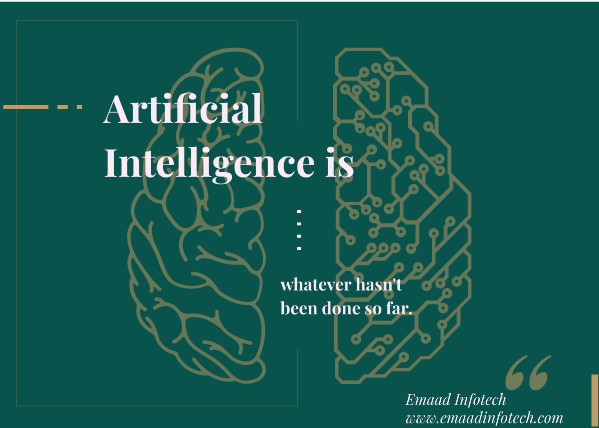 Artificial intelligence is actually one of the biggest breakthroughs in our technology because it is used to help humans think better about their decisions and to help make predictions about what will happen in the future and what is going to affect the future world. Here are the top five myths about artificial intelligence that are commonly held.

What Is Artificial Intelligence?

So!!!, If you are reading this then I’m assuming that you are interested in learning about what is artificial intelligence? The main goal of this article is to look at a few of the top myths about artificial intelligence and to point you to the correct information about the real purpose of AI and why it is being developed in the first place.

The era of artificial intelligent is here and it is here to stay, and there is no going back. Although humans will always have an essential role in the development of AI, we will soon be able to live in a world where we can have robots with whom we can communicate and compete against and have AI that is capable of completely replacing humans in almost every area of our life, from economics to politics, and from warfare to medicine. The time is here and it is now, and we have to figure out how to use the technology to our benefit, or we may find ourselves in a world where we are no longer humans at all.

It’s about to begin and we are all going to have to pay attention to what it is doing. Many people have an issue with the idea that AI will be capable of thinking for itself, which is an assumption that is not borne out by the science. Many experts predict that AI will be able to think for itself, but it will not be able to do anything unless it is forced to. This is a major concern that has been raised in many of the recent debates, which are starting to take place.

So is it the time to worry about the evolution of artificial intelligence? The answer is not quite clear and this will depend on the area in which you live. The United States of America has been one of the largest proponents of artificial intelligence and they are looking at different ways in which to help AI. They have already begun testing out various robotic systems that will allow AI to think for itself and do things like operate a factory. However, one of the problems that this may cause is a shortage of jobs for people.

What is it used for?

This question is very similar and it is important to understand the difference between before one gets started on the wrong foot. Many people believe that Artificial Intelligence has to be part of the future and it is not possible to have this until the Singularity happens. While, in fact, Singularity has been said before and we have heard predictions from all over the world as to what will happen with the future of technology. In this article, we will be dealing with the history of AI and how is it used in our day to day life and how is it used by big businesses?

The first of the myths about artificial intelligence is that it will be completely destructive to the world because computers will take over every industry and replace humans. This is simply not true because as with every technological advancement we have seen in the past the human race had a role to play in their creation and ultimately we are the ones who benefit from them.

How do we know what it is actually ?

AI is an increasingly popular term with the general public, they can mimic the human brain in its ability to learn and adapt in real-time, and it is also used to describe those systems that can learn and adapt to different environments, including learning about human psychology. These systems are increasingly becoming a part of our lives and their growing capabilities have become more than a matter of curiosity, and are actually a major concern to many in the human race.